I often write about places I've been to and things I've done. I've been to a lot of different countries and places, but there are still so many more places for me to visit. Today I was thinking about those places I would love to visit. So many wonderful new memories to make; too many locations to think of, so I will just choose five. 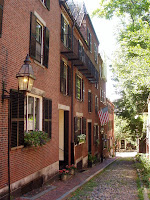 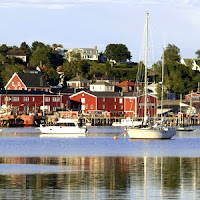 Where do you dream of going?

Nestled in the middle of the forest in Gig Harbour lives a most wonderful and extraordinary woman. Her name is Becky and she is single handedly raising five children. It was my privilege to be invited into her lovely home today.

Gig Harbour is only one hour from Renton; yet it is a world away. Water, trees and a rough road beckoned me on to a Becky's home. I walked into the warm, cosy kitchen smelling the lentil soup simmering on the stove. She had already made fresh bread earlier in the day and now baked it with some garlic butter. A lovely chocolate cake perched on the counter tantalized all of us.

Little Esther, Becky's five year old daughter, played the little hostess. She politely helped set things up for lunch. She later even served us tea. When she was done with her soup, she looked over at her mother and said, "May I be excused?"

She stole my heart. Her two younger brothers were taking their nap in the room. Her two older brothers were not yet home from school. I discovered her brother Amos loved to make chocolate chip cookies...and of course this made me smile...a new little famous Amos.

After having the lovely soup at the kitchen table...we moved into the living room. The crackling fire made it just so warm and cosy. Becky told us about Morocco, where she grew up...she spoke a bit of Arabic for us to hear...We talked of Africa and Asia....We shared the world with each other in the small living room in Gig Harbour. 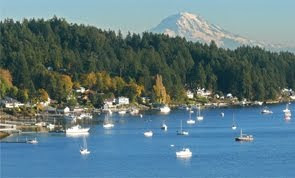 Although it felt like time should stand still...it didn't...the clock ticked away announcing the time to leave. I pulled myself away from the little house tucked in the midst of the woods. With shouts of, "You must come again" and "Thank you so much, of course we will" we trundled away.
at November 23, 2009 6 comments:

I grew up in a very strange position. I was an 'other' Singaporean...you see on every form in Singapore it will say "Chinese" "Indian" "Malay" even sometimes "Eurasian" and then "Other"....I was the "Other" category. When applying for a flat...I would click "Other"...when getting my driver's license...I would click "Other"...one day I looked at the category and thought to myself...what is an "Other"...it is all the people they can't figure out which box to put them in- so they put them in the "Other" box.

I guess that sums up my life. I can't be put in a box....a red haired, freckled, Singaporean...married to a man who thought he was full chinese and discovered he is actually part european and possibly something else and then half chinese- oh my- talk about 'other'-- I guess that is why we have made such a good pair all these years. :)

The problem about being an "other" is people never let you be an "us" or a "them"-- which can be an interesting predicament. You sort of grow up in no man's land. Which gives you an advantage when you travel- because you are easily able to assume the role of "other" in every country you go to. However, you do wonder if there is a place where you can be something else...something more than an "other"...I guess I will never know. :)
at November 21, 2009 6 comments:

Email ThisBlogThis!Share to TwitterShare to FacebookShare to Pinterest
Labels: chinese, mixed, Other, Singaporean

Katrina has always been my fire ball. From the moment she was born she had energy to spare. If I was looking for her, I would look up because she invariably climbed up any pole or ladder she found.

When she was four years old I enrolled her in a swimming class in Japan. After 2 weeks, I had to take her out of the class. The instructor was frazzled. Her first day in class, Katrina jumped in the pool before the instructor could attach a life vest or explain anything about the water. A couple days later she attempted to jump in the deep end while the instructor was talking to the rest of the class. After a couple more mishaps, we knew she would need personal lessons from me to learn how to swim. She is an excellent swimmer today.

When we arrived in Ghana, Kat was 8 years old. She managed to get the measles even though she had been inoculated as a baby. For some reason, she became extremely ill. The doctor treating her warned us she might not pull through. I remember how quiet the house was during the two weeks she was so sick. I never thought I would be wishing for the noise which accompanied my daughter's entrance into a room or the constant motion she maintained as long as she was awake. When she was drifting in and out of unconsciousness, all I wanted was to have her leap from the bed and swing around the room. Thankfully, the day of her 9th birthday she began to pull out of the worst of the illness and the house immediately was restored to its chaotic balance.

Now my live wire is a twenty one year old woman. She continues to light up any room she walks in. "Kat" definitely has her finger in a million projects at once and yet somehow juggles everything with ease. Recently I sat through a remarkable performance she did at her University Talent show. Every year she does a humorous take on a Disney song; this year she was Snow White. She had the entire auditorium laughing.

I laughed until tears streamed down my face. The laughter died down but the tears lingered as I realized she will graduate from University next year in May. After that, she plans to go to New Zealand..."For a year...or more...mom....".....sigh, she will take her energy with her. I will miss her horribly and yet I know this is all part of life. Children grow up, they learn to be independent and they live life to the fullest. This is the way it is supposed to be!

The Palm Grove Avenue house was so much more than a house. It sprawled out like one of the structures in a Gothic Novel. The large lawn area in front of the house accented the massive nature of the building set off to the back of the property. Under the drooping branches of the largest tree, children played and told stories of the 'Ghosts' which walked freely in the house and on the property.

Apparently these ghosts were the lingering spirits of those who had lost their lives in the building. If stories can be believed; the building had been used as one of the temporary headquarters for the invading Japanese army. Upstairs, in the round room, people were said to have been tortured and many beheaded. Whether these stories were true, I do not know, but the telling of them offered seed for many a bad dream and eeiry experience. :)

People who slept in the round room would wake up telling tales of figures walking through the room, being choked during the night or seeing crooked little men with lanterns leaping up to the windowsill and jumping out the window. The strange thing was most of these visitors had not heard the ghost stories before they experienced these things.

How can I describe what it was like to grow up in this mysterious place? The house for me was amazingly comfortable, despite the stories. After all, it was home for me from the time I was a new born baby til I was ten years old. And yet, the nooks and crannies, the long dark hallways, and the sweeping wooden staircase tantalized me with thoughts of 'what could be lurking.'

When I had to go upstairs to my father's office, I would stand at the bottom of the wooden staircase and take a deep breath and off I would dash, disappearing into the blackness. There was no stopping until I reached the top of the stairway and pounded vigorously on the huge door. I remember getting up to the top one day and pounding on the door and no one opened it. The round room peeked over my five year old shoulder; my little heart pounded its own frightened tune inside my tiny chest. The darkness moved in around me; my little fists pounded desperately on the large door. Mustering my last bit of courage, I spun around and bounded down the eeiry stairway- bursting out into the sunny front yard. Flopping down on the grass, it took awhile before I could catch my breath and reassure myself that I was still in one piece.
at November 10, 2009 2 comments: 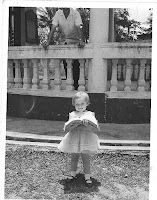 Oh my- can't believe that is me!! The building behind me holds so many memories. Not only personal memories but memories of others who lost their lives in the building. It was one of the improvised headquarters for Japanese soldiers during the second world war (in Singapore). I grew up in the back of the building, hearing stories of beheaded prisoners, blood filled round rooms and ghosts appearing in the hallways.

Not all memories were ghostly; there were memories of countless hide and seek games, sliding down the hill in front of the building, exploring and just growing up. I could write a book about this building and the memories it holds.
at November 05, 2009 10 comments: 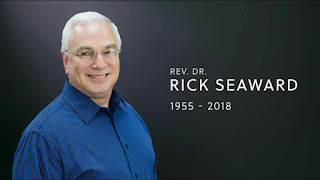